VokoscreenNG is an open source screen casting program for Windows and Linux. It can be used to record videos from your webcam or the screen content, along with the audio source that you choose.

The application is based on vokoscreen, also open source and from the same developer, but the new version has been completely re-written in Qt and GStreamer.

Every option in the program has an i (information button) next to it which you may activate to explain the function which is helpful for new users; an option to turn these off would be useful however to declutter the interface.

The interface has two sidebars, one at the top and the other to the left of the screen. The sidebar has four options: Screencast, Camera, Player and Log.

Note: There is a strange issue with the Windows version. Do not run the vokoscreenNG.EXE directly, if you do you will notice that none of the video formats are available and the program doesn’t work as intended. It just keeps crashing. Instead, run the vokoscreenNG.vbs, which then runs the executable in a working state. I spent an hour trying to figure out why the shortcut I placed on the taskbar was buggy until I noticed the Start Menu shortcut had the vbs in the Target field.

You can use this to record the content on the screen. You have two options to choose from: fullscreen and area. Fullscreen mode captures everything on the screen and supports monitor selection if you have multiple monitors. Area mode has preset resolutions that you can pick to resize the view-finder to the corresponding size (say 320 x 200 pixels). You can of course drag the arrows on the screen to resize it and use it as free-region selector.

Note: Window mode is only available in the Linux version, it’s unclear why. I was able to get it working by switching from Area mode, a crosshair to select the window appeared, but the program said it needed a codec. It appears to be a placeholder setting for now.

Select a mode and hit the Start button at the bottom to begin recording the content, or to pause or stop it. There is a system tray that you can use for starting/pausing/stopping a video.

The screencast tab also has options to scale the video to a different aspect ratio, enable the magnifier tool, and a countdown timer that indicates when the recording will start. The information pane on the right edge of the window displays the total duration of the current recording, the amount of free space available on your hard drive and the size of the video.

The top of the Screencast tab has another toolbar; the options discussed above are the recording settings. The next one is the audio selector which you can use to pick your audio source, i.e. the speaker or a microphone if you have one plugged in. The third tab is the video format selector, which you can use to set the frames per second, video format, video codec, audio codec, quality, and other video parameters. 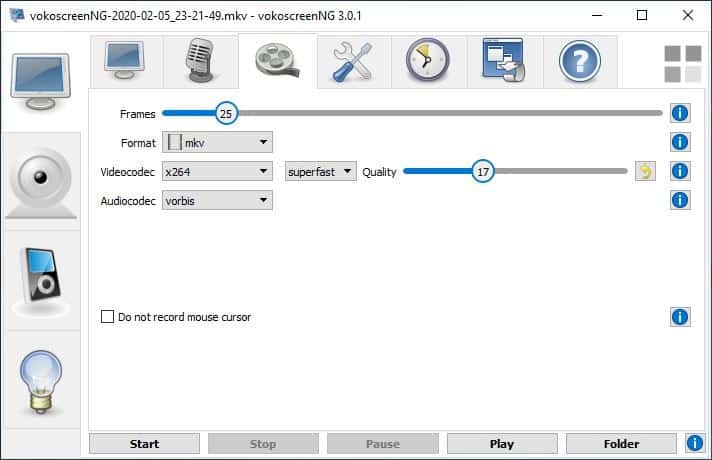 vokoscreenNG’s settings are housed in the fourth tab; use them to define the number of seconds before a recording should begin, how the program should start (minimized, system tray) and set the desired folder for the recordings on the local system.

The timer tab can be used for scheduling a recording. The application uses the 24-hour format and has sliders for hour and minute to easily set the starting time. It also lets you stop the recording after a specific number of hours, minutes or seconds. Hit the Start timer button to activate it. 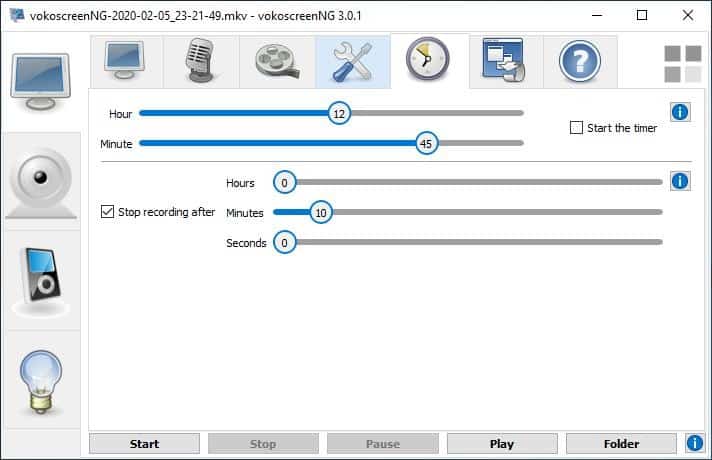 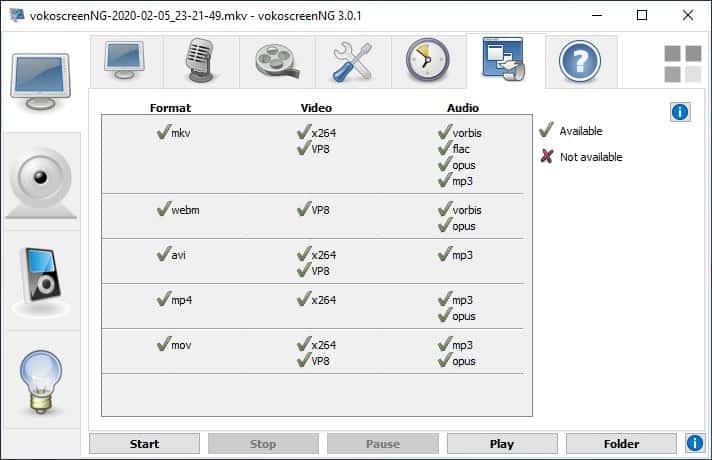 That does cover formats supported by modern media players, YouTube and other platforms, should you want to upload it to your channel.

This mode allows you to record a video using your computer’s camera or an external one that’s connected to the system. Select it and you will see a new window pop-up. The Camera tab can be used to adjust the video resolution, flip the image vertically/horizontally, invert, enable Gray or Black and White color filters. The remove Window frame disables the camera window’s title bar. 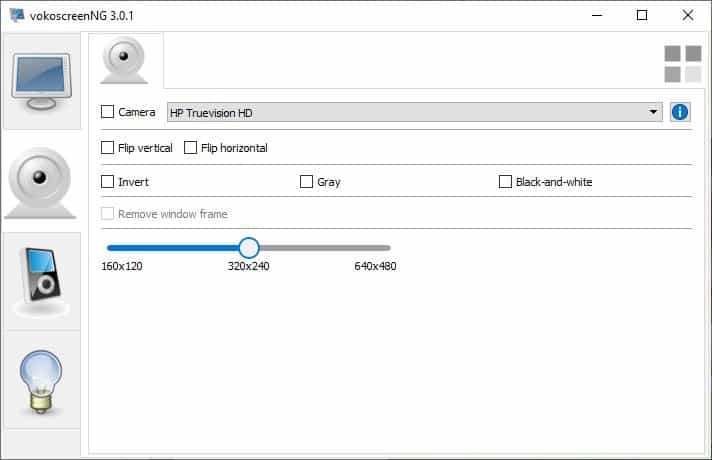 Note: You can right-click on the camera window to view the same options.

To begin recording use the Ctrl + Shift + F8 keys. The same combo allows you to stop the process. Jump between Full Screen mode and Window mode by using F11 or double-click with the mouse. Picture-in-Picture recording works too, in case you want to place the camera window in a corner and record the rest of the screen.

This is the built-in media player of vokoscreenNG, that you can use to watch the current recording. It’s a pretty basic one and it is usually better to use a different media player that offers better functionality. But, it is good enough for quick previews. 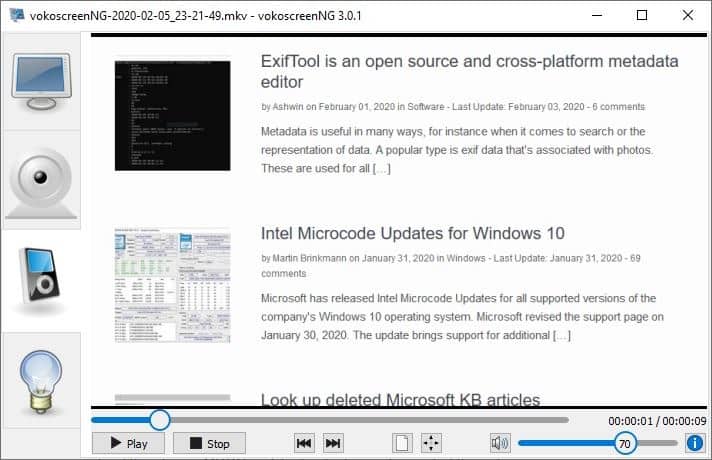 The Windows version can be downloaded from the official website, and the source code is available on GitHub.

vokoscreenNG works well for the most part, but crashes when a custom resized region was set as the source. The program is still in beta, so we can expect it to get better like the old Linux version which is still usable. SimpleScreenRecorder is another user-friendly screen capturing tool, OBS Studio is a more robust choice if you’re looking for a video recorder with advanced options.