Mirinsoft released a new version of the company’s Debotnet application to tweak Windows to the public yesterday.  We reviewed Debotnet in late 2019 when it was released initially and then again last month when version 0.5 introduced massive improvements to the application.

The application matured nicely and we added it to our list of privacy software programs for Windows 10 as a consequence.

Debotnet 0.7 is the latest version at the time of writing and it is considered a major release by the developer. The program can be downloaded from the project’s GitHub website and run right after it has been downloaded and extracted on the local system. An installation is not required but the program will run only on 32-bit or 64-bit versions of Windows 10.

Note that some antivirus programs may flag the executable as malicious or suspect; these are false positives.

First thing that veteran users of Debotnet will notice is that the new version comes with a new theme called Pegasos.

The theme may not be to everyone’s liking but it is now possible to change the theme to one of the supported ten other themes the program ships with. Just select Menu (the three dots) > Settings > Change Theme to do so. 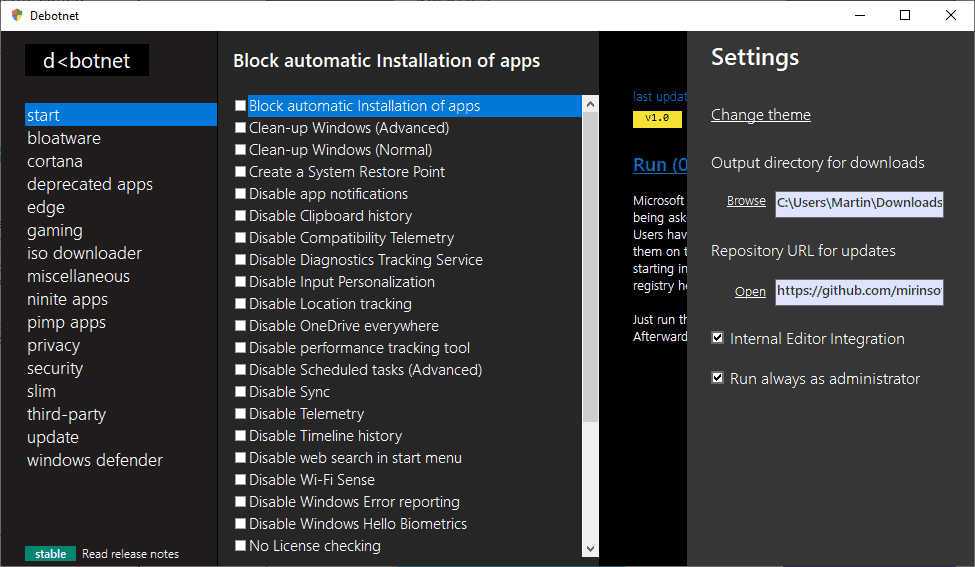 One of the new features of Debotnet 0.7 is the new “Pimp apps” category. You find an option to download Winapp2.ini, a file to extend CCleaner’s cleaning functionality, currently listed there. The developer has plans to extend the functionality in future releases.

Another useful feature added since our last review is the ability to create Windows 10 ISO images using Rufus or the Media Creation Tool.

The majority of changes went into the third-party and bloatware sections. The following options have been added to third-party:

The following are now available in bloatware:

Other than that, you will also find an option to disable user data synchronization under Privacy, and options to disable the Razer Game Scanner and Logitech Gaming services.

Debotnet is getting better and better with every release. The one thing that it is really lacking currently is the ability to create backups before running operations. It is recommended that you back up manually before you use the program because of that.