Version 74.0 of the Firefox web browser will drop support for the encryption protocols TLS 1.0 and TLS 1.1 entirely. Sites that don’t support at least TLS 1.2 will show a “secure connection failed” error page when the change lands preventing users from accessing the sites.

Mozilla and other browser makers including Google, Microsoft and Apple revealed plans in 2018 to deprecate TLS 1.0 and TLS 1.1 in 2020 to improve the security and performance of Internet connections.

The announcement was made well in advance to give webmasters and organizations time to migrate services that still used one of the protocols to a newer protocol.

TLS 1.3 Final was published in 2018 and browser makers like Mozilla or Google implemented support for the new protocol in their browsers. All major web browsers support TLS 1.3 as of today.

While support for better more secure protocols is available, some sites have not migrated to using these protocols exclusively. A Mozilla scan in mid 2019 showed that about 8000 sites of a list with 1 million top sites were not supported TLS 1.2 or higher. The count may be lower by now considering that another six months have passed since the scan was made.

Starting in Firefox 74, sites that use TLS 1.1 or lower won’t load anymore in the browser. The same will happen at around the same time in Google Chrome and other major browsers such as Microsoft Edge or Apple Safari.

In Firefox, the browser will throw a “secure connection failed” error message with the error code “SSL_ERROR_UNSUPPORTED_VERSION” with no option of bypassing the error (because support for TLS 1.0 and 1.1 is removed from the browser). 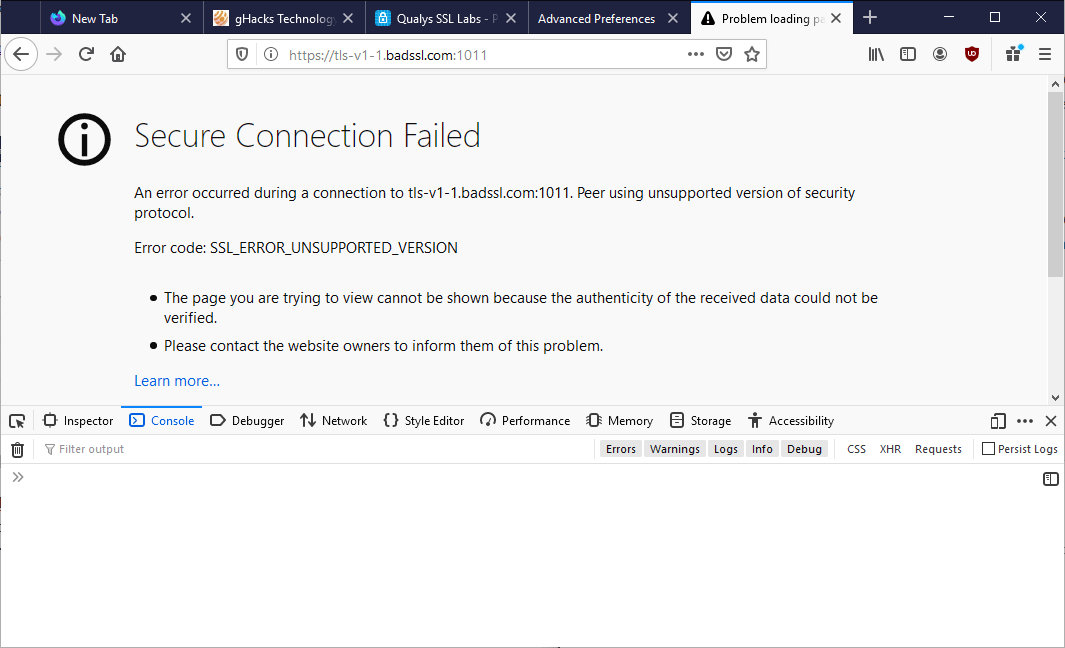 Sites that are actively maintained will likely be updated in time to support newer protocol versions so that connections to these sites won’t be interrupted.

Some sites, e.g. those that are not actively maintained anymore or cannot be updated to support newer protocol versions, won’t work anymore once the change lands. Most Firefox users will see minimal disruption, if any, when Firefox is upgraded to version 74.0.