One can only have so many shortcuts on the Taskbar or the desktop. I have about 15 icons sitting on the taskbar, though I do pin and unpin icons occasionally when the need arises.

A better way to have access to more shortcuts is to use a program like Biniware Run. It doesn’t take up much space, but houses a lot of your shortcuts. How about one that sits in the system tray? That’s exactly what Jovial Menu does.

The application is portable; run it and left-click or right-click on its icon on the tray to display a context meun with the linked items. It is customizable and the process to do so is very simple. All you need to create your own shortcuts is use Notepad and Windows Explorer (to get the location of the programs you want to create shortcuts for).

By default, Jovial Menu has shortcuts for Notepad and Chrome. There are two “folders” called Web Links and Office Links as well which include preset options which you can edit as well.

Note: Mouseover a shortcut to see its path.

Select the “Entry File” option from the menu (or open the JovialMenu.ini directly). A Notepad window should open with the application’s settings. The first part of this document explains how to create your own shortcuts and folders. 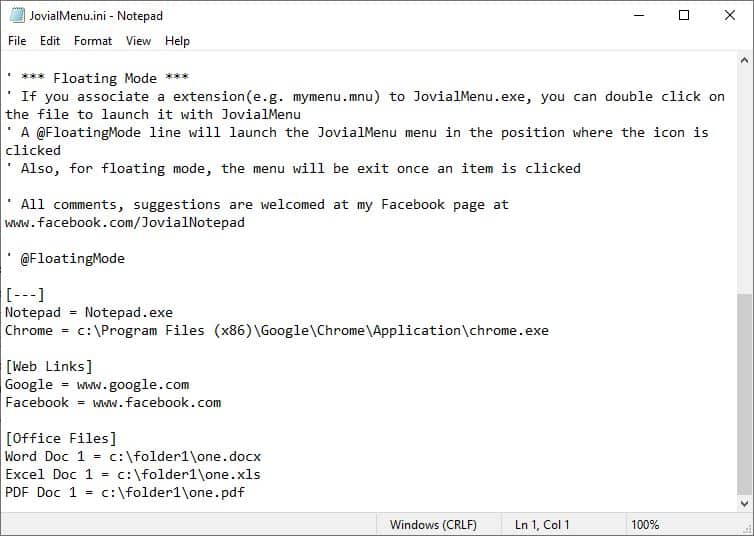 To add a new shortcut, type the name of the program followed by an equal to symbol and the location of the application’s executable. Easy isn’t it? You can add web links or documents using the same syntax.

Let’s create a shortcut for Firefox.

Paste that in the document under the [—] section. Anything saved in this section is used as a direct shortcut (i.e. it won’t be inside a menu like the web links). Save the document, exit Jovial Menu and run it again. You’ll see that the shortcut for Firefox has been added to the menu, and it has the browser’s icon too.

Adding directory shortcuts is possible too, and it uses the same command.  Type the name and the location of the folder, and Jovial Menu will open the corresponding directory in Windows Explorer. For e.g. Downloads = D:Downloads 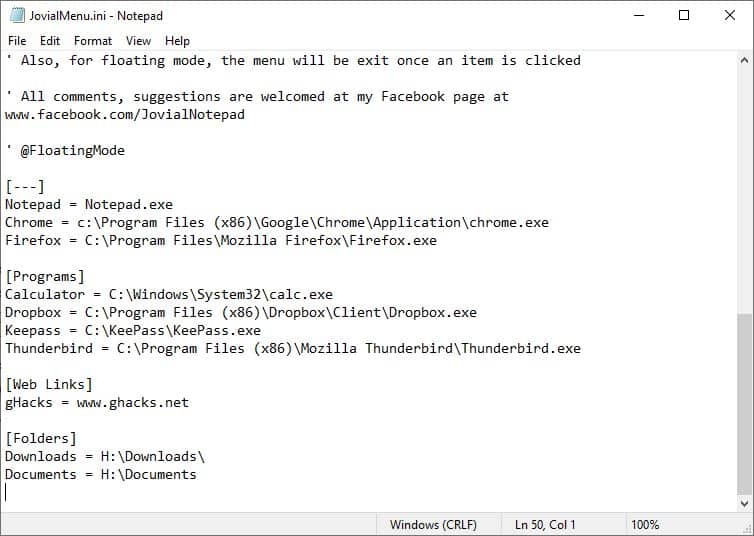 Shortcuts that you place in a menu folder help keep the main menu clean.  Making a custom menu folder is almost like creating a shortcut, and in a way even simpler.

Let’s create one: type the name of the folder inside [ ], like this [Menu name].

Now, create some shortcuts under the folder. Blank lines acts as separators, i.e., they mark the end of the folder. So, do not add blank lines between each shortcut. An example folder menu will look like this 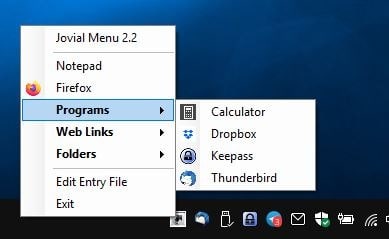 If something goes wrong, just extract the INI from the archive you downloaded and start over.

The program is made by the developer who wrote Jovial Notepad.

I can’t decide which one I like better, Biniware Run can be moved anywhere on the screen and is visually appealing, but Jovial Menu is easier to customize, and kind of feels like a lightweight start menu.